During the latest World Championships we witnessed an interview by the WBF with Alejandro Bianchedi from Argentina. He described the situation of professional bridge in South America: “we have some good pairs that don’t have many opportunities to go out because we don’t have many sponsors”. World champion Norberto Bocchi also agrees that “Bridge should be a sport open to anyone, and not a business opportunity for few”.

We couldn’t agree more. The chances to gain a world title should not depend on a player’s wealth or contacts. In an ideal world it would only depend on bridge abilities. At Bridge Big we want to make exciting/serious bridge accessible to players worldwide. With that in mind we decided to host the 1st World Cup of Online Bridge! This event is the biggest online tournament the world has ever seen and we’ll give it a €25,000 prize pool.

The grand final of the event is an online knockout tournament to be held on February 1st 2015. You can register to the final directly for €350 or qualify through step tournaments that start at €14.

More on the step qualifiers

Qualifiers for the World Cup final come in a new 2-step format. The step qualifiers are tournaments of 8 boards and 8 players. The first-ranked player will win a ticket to the next step (or final) while the numbers 2, 3 and 4 get a ticket to play the same step again.

There are always players

When you play a step qualifier you are matched with other step players as well as players from our Round-the-Clock tournament. That means you can always get a table, even if there are not 8 players present to play a Step qualifier. Even at quiet times we guarantee you can always play. If the table for your next hand does not fill up within 2 minutes we’ll add robots, so you’re never waiting long.

Whenever 8 players complete a Step qualifier the tournament pays out the tickets, and a new empty leaderboard is created. And so on, and so on. That means that you sometimes have to wait a bit to see if you won a ticket or not.

Once you finish your 8 boards you can see your place on the leaderboard, but until then the leaderboard is hidden. This adds to the excitement but also prevents players from artificially delaying their sessions.

Anytime during your 8 boards you can decide to forfeit your session and start a new session. If you do, your score will end up on the leaderboard with zeros for the boards you missed. It is therefore also possible for players to be on one leaderboard more than once.

More on the grand final

The final will be played in 5 stages of 8 boards. After each stage there will be a cut where the top 70% (rounded up to a full table) will continue to the next stage. Meaning that about 1 in 4 players (70% to the 4th power) will make it to the final stage. The following graphic illustrates this.

You’re paid out after the final stage 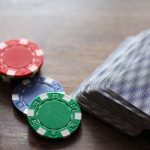 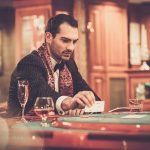